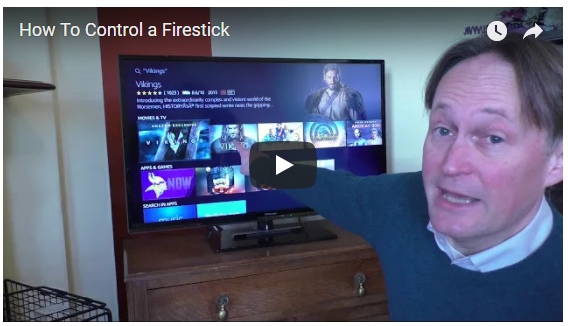 If you’ve never heard of a Fire Stick before, it’s something you can use to turn a normal TV into a “smart” TV, and you can watch online “catch up” programmes on it.

They’re made by Amazon and you do need to have an Amazon account to use one, but you don’t need to have signed up for Amazon Prime (which you pay a monthly subscription for).  You just won’t be able to watch the bits that are exclusive to Prime customers unless you are one.

A Fire Stick plugs into the back of your TV, and it comes with a remote control to… erm… control it.  In general they’re pretty easy to use, but the remote control doesn’t have many buttons on it, so it’s not exactly obvious at first what to do.  Once you know, it’s pretty easy though!

We’ve had quite a few questions over the years about how to use them, so Tim recorded this little video, because it’s the kind of thing that’s easier to explain by showing you.  It’s a couple of years old, but Fire Sticks still work the same as they did then, so it’s all still relevant.

It’s not Hollywood production levels, of course – it was just recorded in Tim’s lounge. But it should help make it clearer how to control your Fire Stick if you have one or are thinking of getting one. If you have a different type of Smart TV, it might be helpful, too, as the principles are similar – though then it won’t work in exactly the same way.

Press play on the video below to watch…

If you have any questions, let us know
Mike 🙂

Cinema, Library, Word to the Wise